Sperm whales are the largest toothed whale, and the only whale larger than them is the Blue whale (my personal favourite). The most famous of Sperm whales is Moby Dick and today, another Sperm whale got to have his five minutes of fame, but not for a very good reason.

Earlier today a 13-metre, 27-tonne (one account reports it weighed “more than 30 tonnes”) injured Sperm whale got stranded on a beach in Belgium, most likely as a result of its injury. Unfortunately it died before anyone could attempt to rescue it, and the poor guy became an attraction.

The first image I saw of the whale only showed it’s tail, but the other images I saw once I clicked on the corresponding articles were actually quite gruesome and terribly heartbreaking.

BEACHED SPERM WHALE DRAWS CROWDS.
A 13 metre sperm whale that died on a Belgian beach becomes a point of interest for locals.

END_OF_DOCUMENT_TOKEN_TO_BE_REPLACED

I feel like I’ve neglected this blog a little bit. I’m trying to think of some interesting things that have happened to me lately, but I realised that my life’s been as boring as watching paint dry (has anybody ever done that?).

One slightly exciting thing that has happened, though, is that two weeks ago, today, I got my green P’s!

No, not those peas.

Not those, either. But at least, the little guys look like they’re celebrating with me!

END_OF_DOCUMENT_TOKEN_TO_BE_REPLACED

On Facebook and on Twitter, I’ve posted links to some pretty gruesome news articles. Always of different things – people getting slaughtered, animals getting slaughtered, etc., but I would have to say that when I came across this article, it exceeded all levels of grisliness for me.

A British man hours away from becoming a new father dropped dead in the maternity ward as his fiancée went into labour.

Dave Robertson, 21, was said to be “immensely excited” about the impending arrival when he collapsed suddenly at the hospital in Swindon, west England, on August 7.

Doctors were unable to resuscitate Mr Robertson and he died a short time later.

A post-mortem failed to determine the cause of death.

The man’s grief-stricken father Ken Robertson said his son had taken joy in picking out toys and clothes for the baby before the birth.

“He was a big lad known as ‘Big Dave’ and had no health problems … he was very much a gentle giant,” Ken Robertson told the Swindon Advertiser.

“He was immensely excited about becoming a new dad.”

Ms Phillips was among those who posted messages on the site.

“I miss you so much, can’t believe how much Sam looks like you, I love you so much,” she wrote.

“Let’s hope our boy touches as many lives as you have, it’s not fair, God only takes the best.”

END_OF_DOCUMENT_TOKEN_TO_BE_REPLACED

I came across this news article today titled ‘Owner of skull urged to come forward’, and a million thoughts went through my mind.

The first was that if someone had lost their skull, they should be dead, right? Apparently not.

A human skull that washed up on a Sydney beach has police looking for its owner, who should be alive and kicking.

But that doesn’t make sense. Your skull contains your brain which controls every thing in your body. Electric impulses from the brain to your heart cause your heart to beat. So even if your heart is perfectly fine, losing your brain would mean that your heart wouldn’t be able to function. Therefore, no brain means no life. But the article insists that the person “should be alive and kicking”. Uhm… ok.

The skull is that of a child, aged between four and six…

Police were alerted when the skull washed up at the Mona Vale beachfront area known as the Basin, in Sydney’s north, on September 12 last year.

END_OF_DOCUMENT_TOKEN_TO_BE_REPLACED

Look what I bought today! 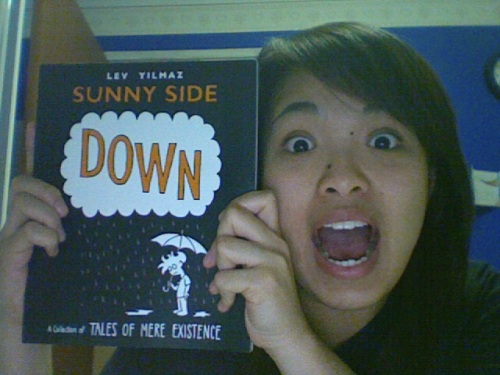 I was trying to look excited/shocked. Emphasis on the word 'trying'. Epic fail, Danica.

I’ve been wanting this book ever since I saw this video in February. The book’s titled Sunny Side Down and it’s by Lev Yilmaz, the creator of the amazing YouTube video series, Tales of Mere Existence.

Ha, I know. I just did a little bit of advertising. But I think you should check out his videos. They’re pretty darn good, and Lev is a GENIUS.