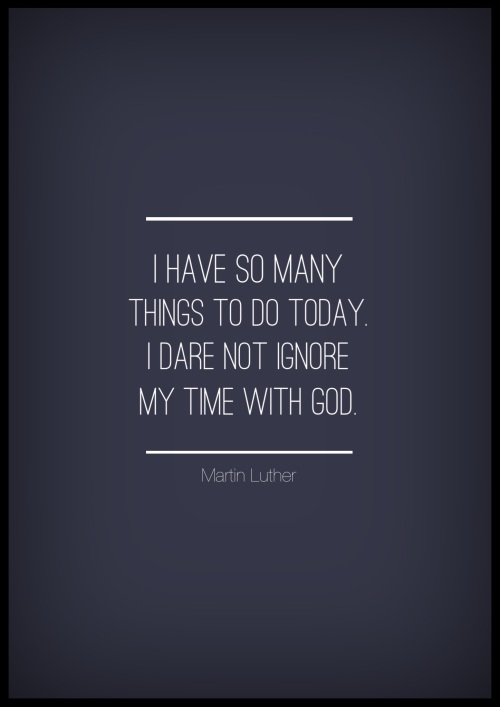 “I have so many things to do today, I dare not ignore my time with God.” – Martin Luther Made on my iPhone with an app called Phoster. – “Keep moving forward.” – Walt Disney

I started cleaning my room today while listening to the Eagles teachings by Dr Rob Carman, but became so engrossed in what he was saying that I just lay on my bed and listened while I had papers and books scattered all over my floor.

One thing I learned today about eagles is how they deal with storms.

When storms come, all the other birds fly away. But not the eagle. When he sees a storm coming from afar, he will fly to a mountaintop and face the storm head on. And when the storm reaches him, he’ll allow the wind to carry his wings so that he can soar above the storm.

Isaiah 40  28 Do you not know? Have you not heard? The Lord is the everlasting God, the Creator of the ends of the earth. He will not grow tired or weary, and his understanding no one can fathom. 29 He gives strength to the weary and increases the power of the weak. 30 Even youths grow tired and weary, and young men stumble and fall; 31 but those who hope in the Lord will renew their strength. They will soar on wings like eagles; they will run and not grow weary; they will walk and not be faint.

Mount Moriah was where Abraham sacrificed Isaac, or was gonna sacrifice Isaac. Mount Zion is the location of the temple of God. Mount Sinai is where Moses removed his sandals because of God’s power and presence. Mount Ebal is where Joshua built an altar. Mount Carmel is where Elijah met the prophets of Baal. Jesus was transfigured on a mountain, Jesus prayed and preached from mountains, and it was on Mount Calvary that he died for the sins of the world.

END_OF_DOCUMENT_TOKEN_TO_BE_REPLACED

The human body needs to consume food on a regular basis in order to sustain itself. Likewise, the spirit of a human being needs to consume spiritual food. And just as a person (for the most part) chooses what food they put in their mouth, we also have a choice as to what we decide to feed our spirit with.

So today for lunch, I decided to hang out with God. It’s something I don’t do as often as I should, but when I do, he spoils me with amazing revelations of his Word, and it makes me wonder why I lose motivation to read my Bible regularly.

For lunch, I read Romans 4-6. I was reading through the three chapters trying to make sense of what Paul was telling the Roman church. Everything was sinking in, but I didn’t feel as if I was coming away from it with mind-blowing revelations.

END_OF_DOCUMENT_TOKEN_TO_BE_REPLACED

What was so significant about that day that I would post a photo of my Bible and notebook for the Project? An encounter with God happened.

I’m 3 weeks into my fast and I’ve found that while the first 2 weeks were pretty easy, the third (this past week) wasn’t. And I’ve also learned, through accountability with other girls at GFRESH, that it’s when you’re doing your best that the Enemy will work harder to attack you and bring you down.

By the end of the week, I felt so unworthy to face God, that I was actually relieved that I wasn’t scheduled to be up for worship at GFRESH. I didn’t want to be up on the stage playing piano for a King that I wasn’t worthy to face. I felt dirty and useless — but a King’s court is spotlessly clean, and He only has courtiers that are there to serve and submit to Him.

8 The Amalekites came and attacked the Israelites at Rephidim. 9 Moses said to Joshua, “Choose some of our men and go out to fight the Amalekites. Tomorrow I will stand on top of the hill with the staff of God in my hands.”
10 So Joshua fought the Amalekites as Moses had ordered, and Moses, Aaron and Hur went to the top of the hill. 11 As long as Moses held up his hands, the Israelites were winning, but whenever he lowered his hands, the Amalekites were winning. 12 When Moses’ hands grew tired, they took a stone and put it under him and he sat on it. Aaron and Hur held his hands up — one on one side, one on the other — so that his hands remained steady till sunset. 13 So Joshua overcame the Amalekite army with the sword.
14 Then the LORD said to Moses, “Write this on a scroll as something to be remembered and make sure that Joshua hears it, because I will completely blot out the memory of Amalek from under heaven.”
15 Moses built an altar and called it The LORD is my Banner. 16 He said, “For hands were lifted up to the throne of the LORD. The LORD will be at war against the Amalekites from generation to generation.”

So when we got the chance to sit down, I pulled out my notebook and borrowed a pen from Christine to jot down what God taught me from the story: