In 2008-2009 I discovered RSS feeds and as a result got quite addicted to reading and subscribing to various webcomics. I’m pretty sure that at one point I was subscribed to a little over a hundred, maybe even over 150. Since then I’ve cut down that list to under 30 (still diminishing even now), and one of those that I absolutely love reading is Space Base 8.

I discovered Space Base 8 before it even began. The author, David Scott Smith, had begun writing a blog about his journey to create Space Base 8, called Monkey Always Wins. I think it was the title that drew me to it, out of all things. A monkey that always wins? Intriguing!

David wrote about the concept of his comic, the various characters that would star in it, and about some of the struggles (1, 2) he faced along the journey. I even learnt about types of paint!

I was thoroughly entertained just reading about the making of the comic, so I decided to stick around for the actual comic. It is now three years and several hundred comics later, and recently David released a Space Base 8 book! This leads me to explain the reason for this post:

I got a copy of the Space Base 8 book for free!

David keeps sending me free stuff ’cause I’m the comic’s number one fan (based on the fact that I was the first reader :P). Last year he sent me a print version of Time Loop, a mini comic within his webcomic (comiception? o_o).

I remember showing it to my sister hoping she would share in my excitement in receiving something for free, but her reaction was kind of “I don’t get what’s so special about it”.

Earlier this year David changed his comic schedule to Tuesdays and Thursdays, and on Monday, Wednesday and Friday he would post drawings of ray guns, robots and rocket ships, respectively. He invited Twitter readers to send in artworks, and I retweeted that tweet, which led to this ‘conversation’: 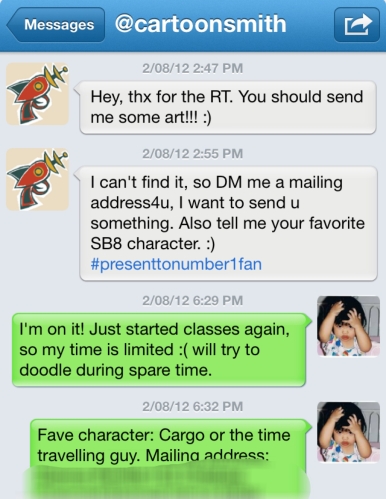 Around the same time this happened David posted a blog on Space Base 8 announcing that he was about to release a book. Two weeks later I received a package in the mail. The handwriting looked familiar, but I didn’t put two and two together until I flipped it over and saw this:

I opened it and ta-da! A physical copy of Blast Off!, the new Space Base 8 book!

Here’s a close-up of the post-it note:

After reading the note I thought, What sketch? and then I opened it up and behold!, my own personalised sketch, featuring Cargo (the monkey) and the time-travelling guy (star of Time Loop)!

And tucked inside the cover was a Space Base 8 business card:

If you’re wondering why he’s offering entry to Disneyland, it’s because he works there (or so I’ve been told o_o).

I opened this particular package in front of my sister. This time she was excited, especially at the offer to get into Disneyland. She even told my parents about it—she was that excited.

If you read webcomics (or even if you don’t), I suggest you check out Space Base 8 (first comic is here). David describes it as being retro/future. The characters’ fashion is similar to that of The Jetsons. But it’s definitely waaay different in terms of humour and storylines. It’s a million times funnier (and you know it’s funny if you can laugh without a laugh track egging you on) and the various story arcs within the comic are always leaving you entertained and on the edge of your seat. (Also, Facebook and Twitter.) And if you feel so inclined, support this guy and buy a book! Available as a physical and digital copy!

Well, that’s it for now. This post is quite lengthy, and it took unnecessarily long to compose. Expect some short posts from me in the coming weeks because I will be trying to make use of this blog again. Photos, reblogs and what not.

PS. I drew some robots and a rocket ship for David to feature on the Space Base 8 blog. When they go up, I’ll link them here.