They're the tall, puffed-up things in the middle.

This particular segment was about mini pizzas. Being a lover of all foods Italiano, I decided to pay close attention to the segment so I could maybe have a go at the recipe one day.

The guy got some pieces of puff pastry, put a small dollop of tomato paste on each, then topped them off with a chunk of some fancy cheese. He cooked ’em in the oven and they turned out to be the beautiful, delicious-looking things on the left in the photo above.

Last Thursday, my sister and I were all, “Let’s make food!” and I suggested that we have a go at the mini pizza recipe. I found the recipe online on the Better Homes and Gardens site on Yahoo:

We didn’t have tomato paste or bocconcini, so I improvised with what we did have — pizza sauce and a huge chunk of camembert that I found in the fridge. I also couldn’t be bothered to cut the pastry into rounded pieces, so I left them square. Everything else in the recipe, though, I followed.

However, disaster struck. I’d never had to cook camembert, so I had no idea how it’d behave if it were melted. Camembert cheese is soft and a little gooey and has a white “casing,” if you could call it that. The casing didn’t seem to be affected by the heat, but the soft part of the cheese melted all over the place.

I started freakin’ out a little, but, what can you do.

A couple o’ minutes later, my sister told me that the cheese had started bubbling and the sauce had formed a thin film.

At this point, the timer hadn’t gone off yet, and I didn’t want my mini pizzas to be undercooked time-wise, so I left them in the oven. Also, the puff pastry hadn’t puffed up. I didn’t know why, but my sister suggested that the puff pastry was probably still a bit frozen.

The time to take them out of the oven finally came, and when they did, they looked nothing like the ones I saw on TV.

They were so delicious, though. My sister didn’t like the taste of camembert, but she didn’t mind it once it was cooked. She’s not a cheese lover like I am.

We both ended up eating them all. Not straight away, but we finished them.

Here’s a few close-up shots so you can see my failed, delicious disasters; 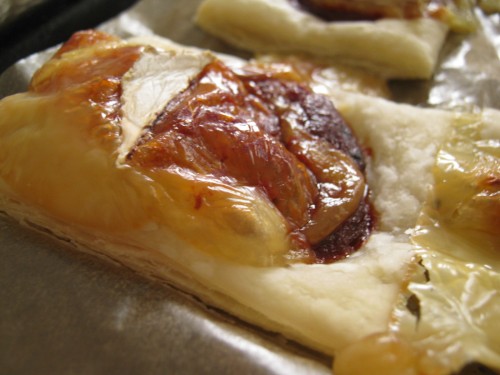 Did I tell you that they were oh so delicious? Nom nom nom, I want some more. Next time I make them, though, I’ll use the right ingredients and make sure my puff pastry is completely thawed out.