If you know me, then you’d know that whales are my favourite animal.

I have posters of them on my bedroom walls. One of my dreams is to see Blue whales in the Antarctic (Killer whales, not so much. They eat penguins). I went whale watching for my birthday. I have a “Save the whales, eat the Japanese” T-shirt. I’m against whale deaths or anything that prevents them from doing what whales do.

Apparently though, people think that getting beached is a ‘whale thing’.

Even so, when I came across this video on YouTube, I was quite amused:

What I find hilarious, though, isn’t the concept of the (I-don’t-know-what-species) whale getting stranded on a beach, but the exaggerated Kiwi accents. Ah nu. Ah nu! I’m beached bru. I’m beached is! Do you heppin to have a bucket or a huse, bru? I need to git wit, esep. Oh man, I can’t get enough of that dialogue.

Anyway, on my 20th birthday last month, a group of my closest friends-that-I-pretty-much-grew-up-with-and-I-would-not-be-here-without-them bought this gigantor canvas and “signed” it as my birthday card.

See that picture/painting at the bottom? Here’s a close-up: 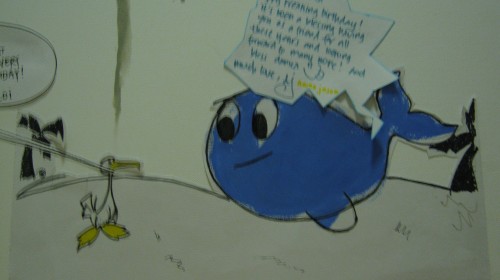 Sorry it's a little blurry. My hand was slightly unsteady and I didn't use flash.

Aaron and Loi drew/painted that. I’m proud of them ’cause it looks awesome (I still gotta glue the seagull’s beak ’cause they didn’t glue it properly).

So then later, Aaron told me that there were more episodes created about the beached, Kiwi whale. Here’s the trailer for the series:

And here are my favourite episodes:

You’re shrunking!
Chull out, bru. I’m just a kud.
I’m a kud whale. I haven’t gone bug yit.
I only swum un fufteen minute untervals. I don’t want my skun to go wrunkly.
I fund uf I flup my fluppers, I cen wuggle back in.

Anyway, I just wanted to share my amusement with my readers.

*NOTE* This is not the blog post I promised on Twitter. This is just a filler blog to entertain you guys and to remind you that I am still alive and that I will still blog. The blog post that I promised will be up by Sunday night (Sydney time) like I promised.

*A not-so-important note but I want you to read it anyway (it is kind of important actually)* My sister reckons I should have a go at video blogging. So I’m thinking for my first one I’ll answer a bunch of questions that my readers want the answers to, and I’ll put it up by the end of the month. Leave a comment here, tweet it at me or email me. Or contact me however you want. I’ll answer the most frequently asked. Or maybe the funniest. I don’t know. Ask away and we’ll see what you guys come up with. (Update: 23.11.2010)