I was spending the night enjoying some Backstreet Boys tunes, and I thought to myself how I hadn’t listened to Drowning, one of my favourite songs, in a while. I had actually drawn something last year (yes, I draw – sort of) which was inspired by the lyrics of that song, and I haven’t shown it to anyone. Except, maybe a select few.

I debated with myself about whether I would show you guys. The next song that played was, in fact, Drowning, so I figured WHY NOT. I’ll show you guys my little artwork. 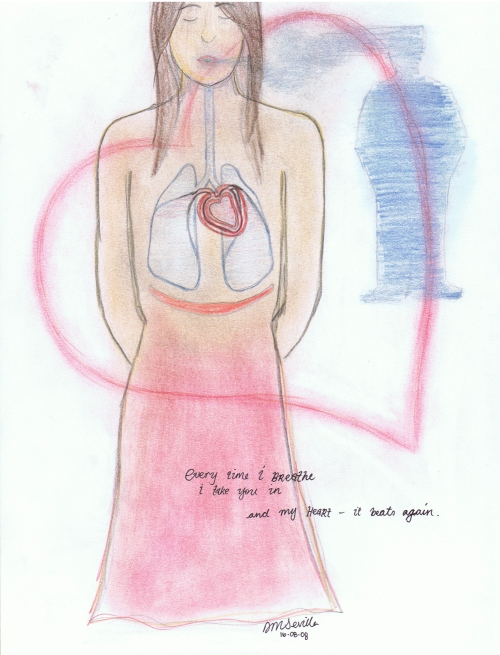 The writing there is actual lyrics from the song. It reads “Every time I breathe I take you in. And my heart – it beats again.” It’s probably my most favourite sentence from that song, and it can have so much depth to it, depending on how you look at it. Here is my interpretation:

Every time I breathe, I take you in. ‘You’ is ‘him’ – my special someone (whoever he is). To breathe something in, it has to be in the form of a gas, so he is blue and hazy to sort of look like a pillar of cloud or something similar. Notice that the top of his head is gone ’cause she’s already started inhaling him. That kinda makes him sound like a drug. But I guess your special someone could be a drug to you, if you get addicted to ’em. The air in her throat and lungs is blue, like him, because she’s inhaled him, and her lungs are even lined with him (like, for example, if you smoke, your lungs will end up being lined with tar and all that crap).

And my heart – it beats again. So, as his essence — everything that is him — enters her body, it causes her heart to beat, which in turn pumps blood throughout her body, and keeps her alive. Yes, there’s a lot more to being kept alive than just your heart pumping blood, but to have to mention the respiratory system and brain activity and everything else is just too much for this blog.

In case you noticed, I know that this drawing isn’t anatomically correct, but I am neither an artist nor a scientist, so please, cut me some slack. My drawing skills and my knowledge of the human anatomy isn’t being tested here.

Essentially, we need to breathe oxygen to survive. Not carbon dioxide or helium or methane or intestinal gas. Oxygen. It is vital that we inhale gases that aren’t going to harm our body.

For a long, looong period of time, I was inhaling bad gases. I wasn’t smoking or anything, but metaphorically, I was smoking probably the worst drug available. At the time, I was high. I had no idea what danger I was in, and I had no idea how it was affecting me. The drug had affected me in such a way that it was all I wanted, and I felt it was all I needed. I gave up on other food and drink that every one was telling me I needed. I nodded in agreement, made promises, declarations and pacts. I told lies. I pushed my food around my plate, regurgitated my food, threw it in the bin… all because I had subconsciously taught my body to solely rely on that drug.

I tried to give up that drug many times. Each time, I went cold turkey, but I still kept some. Why? I honestly don’t know. In case I needed some? But why; I was giving it up. Right?

Wrong. Drugs are addictive, and going cold turkey isn’t really the best way to give them up. You kinda need help with it. The times I went cold turkey, I went at it alone. You also kinda need something to keep your mind off it. If you’re constantly thinking about something, you’ll be constantly thinking about it. (Good) distractions help divert your mind from the drug.

The last time I gave up my “drug” was probably towards the end of April. After the 13th, but before May began. For a while, I was alone, but after a week, I threw away what I had left, got me some help and some proper food, and let me tell you, it has been the BEST time of my LIFE. It’s been the best 2 months compared to the worst (but seemingly best) 21 months, and I would LOVE for this better period of my life to extend to the time of my death.

In conclusion, my point is this. Breathe God in. He’s your oxygen. He’s all you need, and He’s way better than any drug. ANY drug. He’s addictive, but He doesn’t manipulate you to get hooked. You’ll find that you’ll be wanting more of Him. His Word is the food that we need to eat of. It is His cup that we should be drinking from, and because God is also our Shepherd, we will never lack anything that we need (Psalm 23).